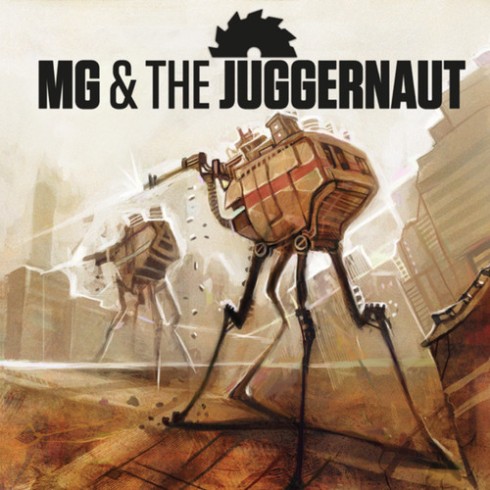 ‘Tool’ is the sophomore EP from Bournemouth hard rockers MG & The Juggernaut and it showcases a musical style that can only be described as Breed77 and One Minute Silence meets Metallica. It’s an interesting blend of riff-based rock music and it allows vocalist and guitarist Simon Miller a chance to let loose with some brilliant guitar licks.

The guitar work is the biggest draw on ‘Tool’ and opener ‘Battlefield’ showcases this perfectly with its thrash metal riffing. The song instantly grabs your attention and pulls you in but sadly the EP has a hard time bolstering Miller’s guitar work with decent rhythms and song structures.

Miller’s vocals also play a part in this and the man’s delivery is very uninspiring to listen to. All the vocals on the EP stay in the mid-range and don’t have an awful lot of power behind them. If Miller flexed his pipes a little bit or even added some screaming to beef up the aggression of some of his riffs these songs could have really shone. The only time things change in the vocal department (for better or for worse) is during ‘Crushed to Pieces’ where Miller starts putting those James Hetfield-esque inflections onto his lyrics. It certainly helps diversify the vocals but I’m not sure we should be celebrating a vocalist for simply aping the style of another vocalist.

As we’ve already mentioned, some of the riffs on ‘Tool’ (like the one that opens ‘Crushed to Pieces’) really impress and this is where MG & The Juggernaut should have focussed their efforts. If the band continued to fill this EP full of memorable guitar melodies they would have created a record which would have satisfied the many fans of arena rock, but sadly the song writing just isn’t up to scratch. Most of the songs on ‘Tool’ lack a big chorus and without these focal points it can become a bit of a drag listening to the record.

MG & The Juggernaut definitely have talent and Simon Miller can occasionally conjure up some brilliant thrash riffs. Unfortunately the band suffer from lacklustre vocals and generally can’t pull together songs that really stick in your head. The band really need to focus on structuring their songs to be more catchy so their audience has a decent hook or chorus to latch onto. At the moment MG & The Juggernaut definitely show potential but it hasn’t been realised. Yet.

MG & The Juggernaut’s ‘Tool’ EP is out now and available to buy on CD direct from the band.

Coastline are a four piece emo band from Kent making big, stadium rock similar to bands like Twin Atlantic, Biffy Clyro and Young Guns. Now that’s a bold statement, but can Coastline live up to those comparisons?

For the most part, yes. Coastline’s Taken Under EP is 6 tracks of fist-pumping arena rock with huge hooks and chorus’ so infectious you’ll need to see your doctor to remove them. This really is an impressive and accomplished sounding release from such a young band.

Stand out moments come in opening song Chapters which has a chorus you can hear a 1000-strong crowd singing along with their hearts on their sleeves. Special mention has to go to the track Embers which begins with a gentle intro before exploding into a chorus so big that Wembley Stadium would have a hard time containing it.

The songs on Taken Under are simple yet beautifully written to maximise in an optimum “feel-good” factor. Vocalist and guitarist Simon Gearing is the band’s biggest pull as his sincere but soaring vocals punctuate every song with a memorable chorus.

The guitar work is also brilliant throughout. The melodies in every song are really strong and expertly played. Songs like Dance Alone manage to surprise with its’ inclusion of a massive riff which plays the song out and draws it to an epic close.

Unfortunately for Coastline, their biggest problem lies with a lack of originality. Their style of music has been done by many other bands a million times before and they run the risk of being lost in the crowd. Luckily, Coastline’s music has enough draw of its’ own to help them, but future releases are going to need to bring some special to the mix in order for this band to not be confused with other artists like We Are The Ocean or Youmeatsix.

Coastline’s Taken Under is undoubtedly a special release. The band’s winning formula of massive chorus’ and even bigger hooks are going to win this band a lot of fans and they have all the potential to be one of the brightest stars in UK rock. Let’s just hope they really do shine bright and not get lost among all the other stars out there.

Coastline’s Taken Under is released independently by the band on all good digital outlets come March 4th 2013.